How To Introduce A New Cat

Introducing a new cat to your home

We’ve already written about the grieving process of pets, and whether or not running out to get a new companion for a suddenly single-pet household may not be the best move – but when the time comes, and you decide that you do want another cat in your home, knowing how to introduce your cat to a new feline friend is very important.

The introduction of a new cat to an existing cat in the family can be a stressful time, as cats are quite territorial by nature and a sudden or incorrect introduction can lead to a whole series of problems including violent behaviour, messy toileting, antisocial attitude and so on. Here are our tips for introducing a new cat to the home…

It can be difficult to know what sort of cat to look for, especially if your current cat became very accustomed to their previous companion o 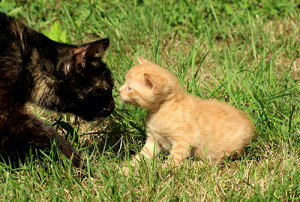 ver the years. As a rule of thumb, consider your new cat’s age, gender, and even their size. For example, a kitten may be less of a threat to your older cat, while a male and female may get along better than two cats of the same gender.

2. Set up a room for the newcomer

Keeping your kitties separate may seem detrimental to their relationship, but it’s important to take things slow and steady to begin with, as a rushed introduction may lead to a hissing fit and a few paw swipes. Choose a room in your home that your current cat does not use very often and place all the essentials inside that your new cat will need. This includes their litter box, food, water, toys and new bed, and even a pheromone spray such as Feliway to help ease anxiety. You can then begin to introduce your cats subtly by getting them used to the smell of each other.

First and foremost, your cats will identify one another by their scent – which is why getting your cats used to the smell of one another is so important. You can do this by switching their bedding, leaving a jumper or other item of clothing with one cat for a time before giving it to the other, or simply by stroking one cat followed by the other. While doing this, it’s also important 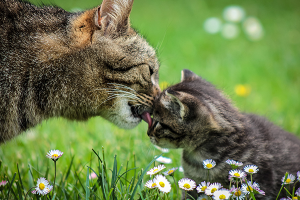 to spend time with each cat individually, allowing them to associate the other cat’s smell with positive things such as cuddles or play time.

Once you’ve spent some time getting your cats familiar with one another’s scent, it’s time for them to meet face-to-face. If possible, the first few interactions should be done from behind a barrier, such as a training crate or a cat carrier, in a neutral part of the home. The barrier will allow your cats to get up close and personal with little threat of injury.

The next few meetings should continue in a neutral space, such as a hallway, which allows the cats to view one another from a distance and escape routes should they need them. Be sure to monitor the cats’ behaviours closely – if either cat shows signs of being distressed, they should be removed and the re-introduction attempted later, at a greater distance.

Over time, you’ll find that your cats no longer require a barrier or strict supervision. Calm and friendly behaviours should be rewarded. When it comes time to add the new cat’s belongings in with the other cat’s, be sure to keep food and water separate (some cats don’t like to share!) and ensure that each cat has their own litter box, plus one. 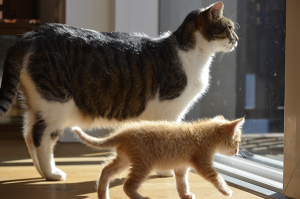 Give the cats plenty of space to play and interact, but also places where they can have their own time out – the more harmony you can create, the better your cats will get along in the future!

Want to know how to introduce a new dog to the home? We’ll have an article for that, too. Stay tuned…