Pet Memorials Around the World

Memorial practices for pets around the world

In the Western world pet funerals, private burials and cremations are commonplace nowadays. But twenty-odd years ago, this was not the case – and things differ around the world, too.

So, how are pets celebrated and memorialised around the world? Read on to find out…

The Tower of Souls and Buddhist pet temples of Japan

Banrei To, “The Tower of Souls” inside Jindaiji Temple, Japan

Owning a pet is seen as somewhat of a privilege in Japan due to the high cost of living as well as tight building restrictions. Therefore, those who are lucky enough to own a pet treat them with the utmost care and respect – and this extends to their death and after-death care as well. In fact, due to the Buddhist belief that animals have souls, when a pet dies within a Japanese family, it is almost treated like the death of a child.

When a pet passes away in Japan, their parents have a few options to choose from, including a cremation either at a shrine, a specialised facility or at home. If a pet is cremated at a temple, the family can gather, light incense, pray (and receive prayers from the monks) and farewell their pet in a ritualistic manner. Afterwards, the pet may be laid to rest in a temple such as Jindaiji Temple, where the Buddhist saint Junishi Kanzeou Bosatsu guards over the animals. Jindaiji also has indoor vaults, where families can keep an urn and other important objects such as offerings of food and treats. The respect for life as well as the recognition of death make pet memorials in Japan deeply spiritual and reflective. 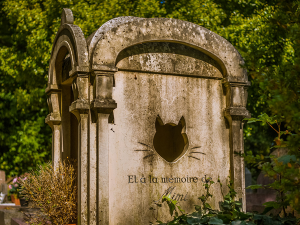 A unique tombstone for a cat, Cimetière des Chiens, France

With its art nouveau gates visible from the Seine, Cimetière des Chiens et Autres Animaux Domestiques (“Cemetery for Dogs and Other Domestic Animals”) is the largest pet necropolis in Europe, perhaps even the world. In place of looming mausoleums are stone dog houses, while toys rest upon headstones and wonderfully ornate statues appear around every corner.

Aside from dogs hundreds of cats, horses, birds, rabbits, turtles, mice, hamsters, fish, a gazelle, a monkey, a lion, a sheep and many more animals have been buried in this late 1800s cemetery, which also features curious details such as tombstones that act as steps and a dog’s grave where tennis balls are encased in a clear sphere. 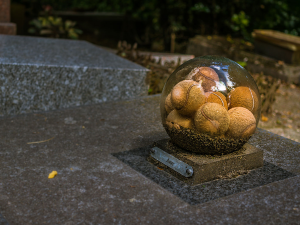 Throughout the cemetery appears the epitaph Je ne t’oublierai jamais – “I will not forget you.” 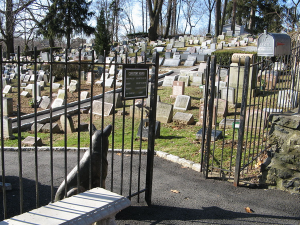 Established in 1896 over 70,000 pets are interred in Hartsdale Pet Cemetery, the oldest pet cemetery in all of America. Across its five acres are buried dogs, cats, rabbits, birds, reptiles, monkeys, horses, a lion and even some humans, and graves for pets of the rich and famous. Actors and entertainers including Mariah Carey and Diana Ross have had pets buried at Hartsdale, which also holds memorials for dogs that served in World War I, Laika the space dog, and search and rescue dogs from the Oklahoma city bombing and the 9/11 terrorist attacks.

Other memorials and epitaphs have been erected simply for the joy that a pet brought their owner, and as such Hartsdale’s lawns are crowded with touching remembrances of pets that have passed. 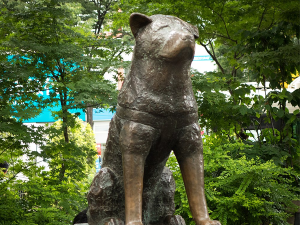 The famous statue dedicated to a dog known as Hachiko stands in the bustling area of Shibuya, Japan. Hachiko was an Akita dog that belonged to Hidesaburo Ueno, a professor at Tokyo Imperial University, whom Hachiko would greet at Shibuya station each day after Ueno had finished work. However, on May 21st 1925, Ueno suddenly passed away while at work from a cerebral haemorrhage. Showing the utmost loyalty to his master, Hachiko would return to the station every day for the following ten years, until he passed away on March 8th 1935.

The subject of a 1995 animated film, Balto was a Siberian Husky sled dog who led a team on the final leg of the 1925 serum run from Nenana to Nome, Alaska. The serum run had taken place to transport precious diphtheria serum to the small town of Nome after it was cut off by the harsh winter weather. Balto’s team along with a relay of others were summoned to transport the serum where trains and planes could not go, saving Nome from an epidemic and ultimately saving many lives. 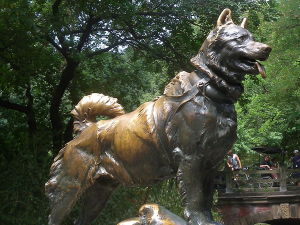 A bronze statue raised in Balto’s likeness now stands in Central Park in New York City and reads, “Dedicated to the indomitable spirit of the sled dogs that relayed antitoxin 600 miles over rough ice, across treacherous waters, through arctic blizzards, from Nenana to the relief of stricken Nome.” 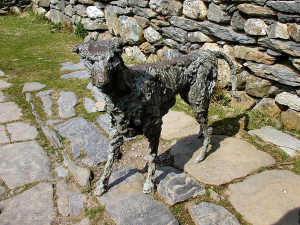 Gelert was a hunting hound that belonged to the 13th century prince Llywelyn the Great and was a gift from England’s King John. Known to be loyal and faithful, Gelert was Llywelyn’s favourite hound. However, when the prince and his princess set out for the day’s hunt together, they returned to find their baby missing and Gelert’s muzzle bloodied. In despair for both the dog and his child, Llywelyn drew his sword and killed Gelert on the spot. As soon as he did however, he heard the cries of his baby from a dark corner of the room, and came to discover a massive wolf that had been killed by Gelert to defend the child. Gelert was eventually immortalised in the name the village is known by today Beddgelert.

An Australian pet this time! Trim was a cat born at sea on a ship called Reliance that was on a voyage between the Cape of Good Hope and Botany Bay. He was then adopted by Captain Matthew Flinders, the English cartographer who led the second circumnavigation of Australia in 1801. Trim sailed with Flinders until 1803, when he went missing on the island of Mauritius and was never seen again. Trim’s bronze statue now stands outside the Mitchell Library in the heart of Sydney. 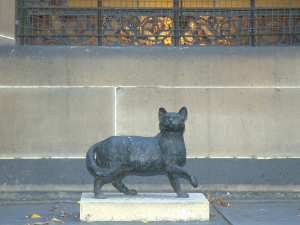 The plaque underneath the statue reads:

“TO THE MEMORY OF
TRIM
The best and most illustrious of his race
The most affectionate of friends,
faithful of servants,
and best of creatures
He made the tour of the globe, and a voyage to Australia,
which he circumnavigated, and was ever the
delight and pleasure of his fellow voyagers”

< Read previous: What To Do When A Pet Passes || Read next: How to Help A Grieving Pet >